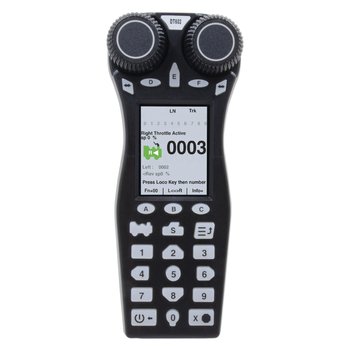 The DT602DE is our top-of-the-line, Duplex Radio Super Throttle.  The DT602DE Advanced Super Throttle gives you direct control of two locos at a time with all the powerful features and flexibility serious model railroaders demand.

The DT602DE is designed to handle nearly every aspect of layout control.

With the DT602 you can run trains, create consists, set up routes, control up to 29 functions including sounds and so much more. With the soft On/Off switch and advanced power saving modes you can now operate longer than ever.

The DT602DE gives you full Duplex or two-way radio communication to and from your LocoNet systems, select, dispatch and run locos without ever having to plug in!

This unit is for Europe Only !