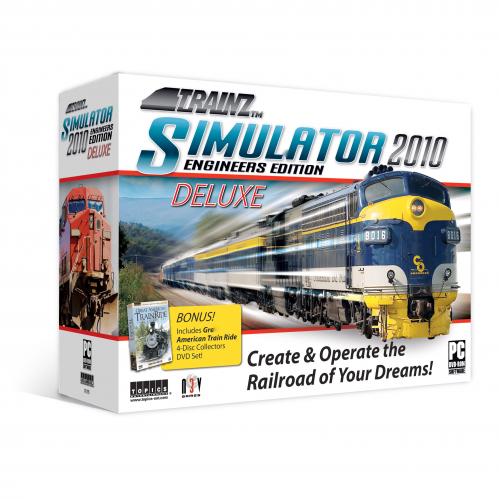 On Sale While Supplies Last !

IN STOCK READY TO SHIP

NO CONSTRUCTION EXPERIENCE REQUIRED JUST LOAD YOUR SOFTWARE INTO YOUR COMPUTER AND YOU CAN START BUILDING THAT DREAM LAYOUT RIGHT AWAY WITH EASY TO READ INSTRUCTIONS AND MUCH MORE...

Does not take up much space on your hard drive. It allows you to step into the world of Train simulation with a build your Layout feature. A good entry level software to understand the TRAINZ PC SIMULATOR FUNCTIONS.

SpeedTree® New to Trainz Simulator 2010 is the inclusion of SpeedTree®. High Quality and detailed trees breathe new life into your routes and bring your worlds to life. Check out the tech video on the left for information on SpeedTree.

New and Upgraded Routes* Included in the TS2010:EE Release will be several new routes for you to explore as well as improvements to routes you're all used to. These include: