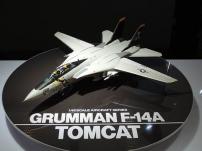 478 of the 700-plus Tomcats produced were of the F-14A variety, which refers to most early variants.

ONLY 2 REMAIN IN STOCK HURRY BEFORE THEY ARE GONE !